There are places in the quieter corners of the earth that seems so unreachable, yet so tantalising with bright blue waters, barren islands, and empty beaches. Places that, in a mere glimpse, would evoke your inner wanderlust almost instantly. The recently famed Komodo National Park is one of them. Sit in the borderland of eastern Indonesia, the Komodo looks like it just transported from the lost world. But you might think that Komodo is—no matter how appealing—is just too rugged, too far, and too of out reach. Wait until you discover that Labuan Bajo, the gate and port town to the national park, is brimming with dozens of Komodo cruises Labuan Bajo that are so ready to take you into spectacular adventure in this isolated frontier. 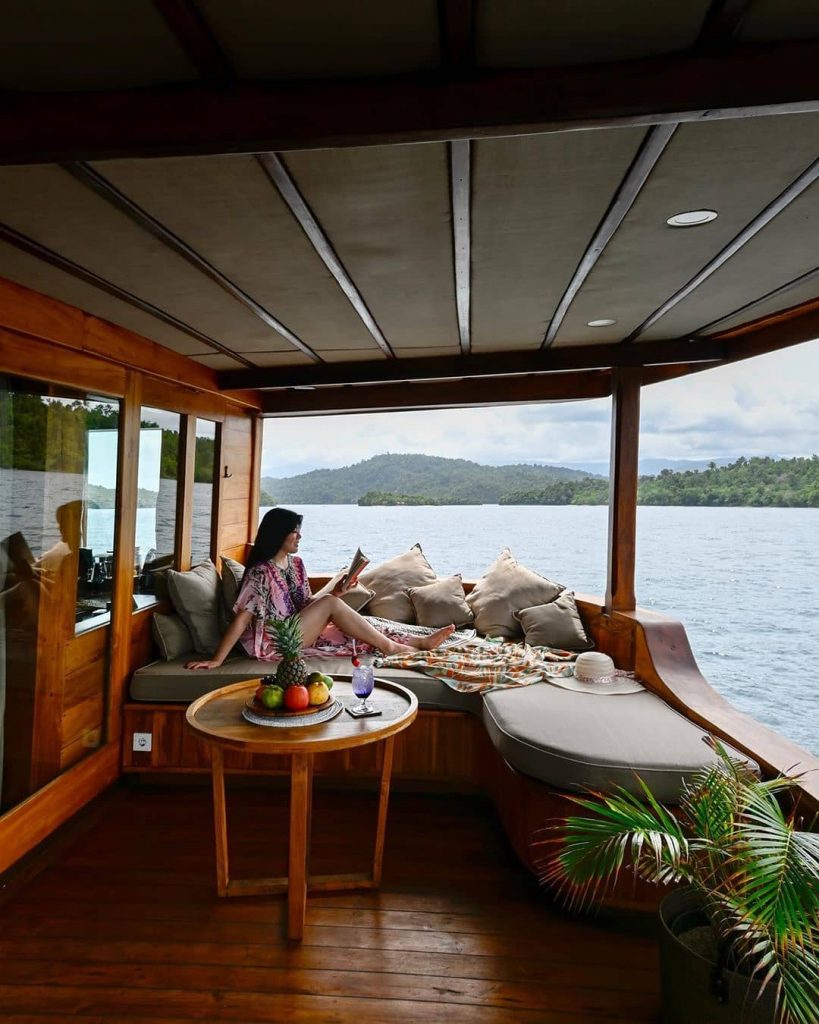 If you have been into cruise ship before, Komodo cruises in Labuan Bajo might stray a bit from what you think. While most cruises are built in mega ships, most cruises in Komodo could only take up 10 – 20 people most. Small ratio of passengers to crew, exclusivity, and authentic experience is their motto. We’ve even see a luxury ship exclusively cater for two people on board! Almost every cruises here are built on Indonesian traditional phinisi design. A two masted wooden ship that, historically, were made for transport and cargo. Cruise ships modify the phinisi with modern, luxurious touch. Onboard the ship, you gonna find three to four decks housing 3-9 imposing suites, which decor and facilities are in par with luxury resorts. Decks are entirely covered in polished woods, equipped with cushiony beanbags, loungers and soft daybeds. Some

Lux Cabins in A Floating Hotel

If you think that ocean view hotel room is the best, wait until you see cabins on Labuan Bajo cruise.  They know what the game. The best cabin is, of course, the one located in the upper deck. Master bedrooms in Komodo Cruises Labuan Bajo usually boasts dramatic wraparound windows offering ever-changing panoramas over the seascapes. You could enjoy the view while reclining on their king/ queen size bed or having private spa while savouring the landscape.

Due to the size of the ship, a cruise usually only have one single master cabin. But that doesn’t stop the other cabins to give you a pampering retreats. Cabins on the main deck were built with large windows on one of the side, providing a lot of natural light to the room. Lower deck cabins are definitely cheaper than those in upper stories. That doesn’t mean, however, that they are less comfortable. With sumptuous beds, plentiful storage, and rays of natural light from the outsized portholes, these suites could still be the most comfortable cocoon you have ever been. Rest assured knowing that all cabins in Komodo cruises Labuan Bajo are ensuite!

Read More: Sail Like A Royal in Luxury Liveaboard Komodo

The Komodo might be far-flung and isolated, but dining in these cruises are something else. Expect to find fine dining in the middle of empty sea. The crews usually start the day with sumptuous breakfast. Tropical fruit breakfast, the famous nasi goreng, scrumptious noodles, toasts, eggs on various styles, and healthy juices are what usually on the options. Lunches are sometime arranged in one of the hidden sands with tapas, though you can always have it on boat . Dinners usually arranged on the deck, made even charming as the ships is shining through the darkness of the night.