Komodo, the dragon-like creature from Komodo National Park gain worldwide attention ever since it was discovered by the Dutch in 1910. But just like the appearance, this exotic lizard is a really dangerous animal that can attack humans who approached them. That’s why in Komodo Dragon Island, many rangers are stationed to ensure tourists’ safety. 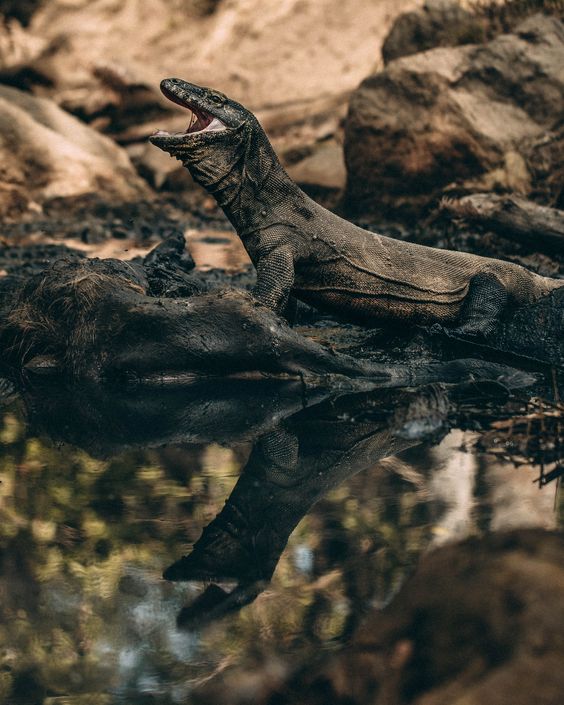 But looking at other carnivorous creatures like lions or tigers, they can be thought to be a docile creature. Not only do they often kept in zoos or safari parks, but the circus also featured the king of the jungle as the main attraction. So with that thing to consider, comes a question: can Komodo also be tamed?

Aside from famous for being a tourist attraction, Komodo is also infamous for several cases of attacks that results in the victim’s demise. Komodo is a very aggressive creature, sometimes they don’t need to be provoked in order to attack. They can run up to 13 mph or 20 kph, meaning they can easily outrun average humans.

They can only be found in Indonesia, in Komodo Dragon Island to be exact. That’s because the climate is suitable for their habitat. Komodo can only live in tropical forests and savanna with a temperature of around 35oC or 95oF. Many countries try to import some of the animals but many of them died because of the unsuitable environment.

What does Komodo eat?

Meat, all kinds of meat. Komodo is ferocious and prey upon animals that even bigger than them. Animals such as water buffalo, deer or pigs that lives around Komodo National park are often become the primary target for Komodo.

Like I already mentioned, Komodo prey on humans as well when we got in their trail. Ever since Komodo National Park established, there are lots of Komodo attacks cases to either the guests or locals. Most if not all the victims are dead, although there are a few survivors because luckily they haven’t been bitten yet.

With sharp and serrated teeth like a shark, Komodo can easily tear through their prey to death. And even if the target is still alive they will still die within 24 hours due to bacteria poisoning. This fact makes Komodo a really terrifying creature that should be avoided to approach carelessly.

What You Should Not Do in Labuan Bajo Cruise

So, can they be tamed?

Many people have tried to tame Komodo but most fall victims to their aggressiveness. Komodo is different than lions or tigers that still have compassion and less aggressive. Not only that, the bacteria that came from their bite can be dangerous as well to touch.

The conclusion is no, probably in the future someone can find a solution but for now, Komodo is a dangerous creature that clearly not suitable for taking a walk with. Let the Komodo Dragon Island be their only caretaker, mother nature truly are the best candidate to keep them in check.