Labuan Bajo becomes travelers’ hot list in this pas decade, and Komodo cruise begin to be a sought-after luxury. It’s hard to not love the vessel. Inside the well-polished wooden structure, you can relax in its comfy loungers while the cruise is taking you to the lair of notorious Komodo dragons. Passing series of beautiful islets wrapped in clear blue ocean and staring to the horizon. A voyage in the frontier made so much easier with fancy facilities the cruise offers. 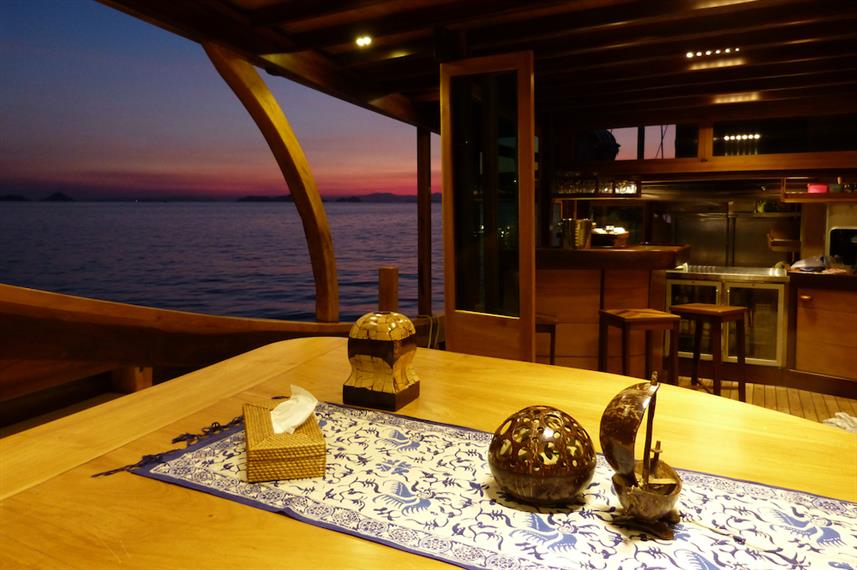 Komodo cruise is the best option for travelers looking for enjoyable adventure with companions of creature comforts. Though we call it cruise, however, the “cruises” in Komodo might not appear as any other cruises in the world. Actually, compared to other mainstream cruises, these Labuan Bajo’s ocean liners appears on the smaller side. Instead of total steel structures, cruises in Komodo employs wooden structure for the body. Wood also dominates the interior of this schooner, evoking the sense of old times and closeness to nature. Instead of Titanic-like cruises, imagine the luxurious navy seal schooners from Pirates of the Carribean movie set—that’s how Labuan Bajo cruises looks like.

Most large cruises bring large group of passengers, sometimes more than 1,000 in one take. Komodo cruise, however, are mostly limited to maximum 30 passengers on its board due to its size. One of the cruise even specially designed for honeymoon couple, catering for only 2 people onboard!

While the wooden cruise might lack of casinos, indoor night club, or basketball courts, it never fail on other department of luxury. Onboard spas, buffet restaurant, and exclusive lounges are some of the highlight of Labuan Bajo cruisers. The small number of passengers speak closer attention from the crews and thicker intimacy with surrounding nature. Trust me, that’s something you would want when you are travelling deep between pure islands and tranquil water.

Komodo Cruise is A Modern Take of Indonesian Traditional Phinisi

The Bugis is one of ethnic group of Makassar Island, famously known as Indonesian bravest sailors in the past. The phinisi is believed to have been around since 14th century, transporting cargo within Indonesia archipelago. It was also the main vessel for fishing, transportation, and expedition.

Today, the tradition still remains. The craftsman in Tanah Beru, Bulukumba regency, Makassar, are still widely known as the best phinisi crafter in the nation, passing down ancient techniques from generations to generations. The purpose, though, has shifted. Their majestic crafts are no longer preserved for cargo and transportation services. The traditional phinisi schooner has been refitted to suit luxury liveaboard experience, bringing guests from all around the globe to sail across Labuan Bajo’s best kept secrets.

All Modern Amenities Under the Flapping Sail

For most people, cruise associates with luxury, and in Komodo cruise it’s essentially true. Passengers are spoiled with queen size mattress in a cabin with a view, hot waters, and hotel-standard amenities. A spacious sundeck boast relaxation and endless sun tanning opportunities while the restaurant serves up delicious Indonesian, Asian, and Western cuisine.
In this modern day, Komodo cruise arise from a well-preserved tradition and become the ultimate icon for Indonesian seafaring heritage. Have you ever experience the grandeur of sailing with one?